Cross Species Genetics IS IT POSSIBLE?! 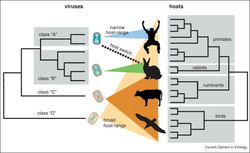 In the human world we wonder what is our purpose in life and we wonder why should we even be here and why we were created. I have the answer. I believe our purpose in life is to create and use knowledge to benefit others, not just ourselves. We are here for the exact same reason as our purpose in life. And the next question has the same answer as the others. Let's work together to save the world, not harm it. This is my vision. A world without diseases. What if we use nanotechnology to build spaceships and sell to NASA and what if we create bionanotechnology to cure heart disease and cancer by injecting a serum that releases this bionanotech out into the nervous system. what about one man plane like iron man. Anything is possible like time travel and intergalactic travel. it sounds stupid, I know, especially since I'm so young but it's true this can be done. Maybe it seems far fetched but God blessed me with a brain and a good heart and the intelligence to use my brain for good, not evil. Now, for safety precautions I cannot specify my ideas until you reply or send me an email saying who you are and how you are able to help, and how old you are. It's not that I am non trusting but I just cannot explain anything until this happens so that I don't end up getting my idea ripped off by people. I've spent almost my whole life studying Albert Einstein and Stephen Hawking so I know what I am doing. I know the risks of nuclear disaster and a whole lot of money wasted for nothing but, it can work. Like I have stated before I've been studying this since I was only five years old and now I am thirteen so I know what to do and how to do it but, I need help and it can only come from you; whoever is willing to help me. I will be posting every Monday,Wednesday and Friday as soon as someone messages me and i will explain the project and how it works. So, come on and join me and my friends in a revolution to change mankind for the better.


Jay - I believe it is possible because it does happen naturaly.For example,with a liger a mix of 2 species yet they are about to make this "freak" of nature.Thier cromosomes being close enough it pairs the tiger and lion is able to create a new breed,even though the new breed itself is not able to create the same breed of spring it is able to still reproduce and create a lion or tiger as an offspring.:)

C Brown - It is Possible, i will actually begin research over the next months. I dont want to go into full details, but i will be finding the perfect dosage, and actually seeing if this process will work. To be able to cross species bond, you must have a difference in DNA of 3-5 %. And to do that you would have to water down the oposing species with your own. But the only thing that coud be bad, where something could go wrong is that, if something bad goes wrong with the DNA you could either genetically mutate or decease.

C Conners - well .... theres alot of controversy revolving around most if not all Genetic study (Largest of all Cross Species splicing). many beleve it is not possible,(I for one have done my own research on the topic). I have found alot of brick walls and dead ends ... so much so i was considering giving up my work all together ,You see those that beleve say that even if possible abnormal mutations can result in the host subject also that the dna needs to have 93% alike chromosomes effectively making the list and level of donor species rather short such as apes,dolphin and othere higher evolved species making the idea of a coss of spider&human ,fish&human or lizard&human or even plant&human impossible the truth is so much more then this roadblock... in my studys all those roadblocks were there . Then a revelation came to pass ... those species lacked something ... 93% (^as stated up and by many) right ... but what about ... breeding... Takeing an unevolved ungrown nucleus of the doner species befor it begins to mutate and grow into the infant that it would become .(This is a lil harsh and a lil hard to grasp but bare with me). At this point ... incorporating stem cells of the host into the doner tissue. Effectively changing the doner tissue ... but tweaking the DNA just enough where the doner DNA is there ...but dormant . Then once the new species fully mature's using it's DNA and tissue as a sample. Then from that point all the chromosomes needed would be there and from that point its only a matter of tweaking the Code of the doner eather in the host or in the serum befor administering to the host to bring the latent dormant genes to a head picking out each series of sequences you want to utilize. .. I have been playing with the idea for some time ... and well i know its alot of sleepless nights but the truth is ...1 of 2 things are going to come to pass and make us obsolete this .... or robots... would you rather be evolved ... or killed by a machine for being a fleshy ? ive got notes,live trials, records,and spreadsheets of all my work ... its going FANtasticly if anyone has any thoughts or ideas and has the foot work and notes needed to map out a path for me to run a RL test or trial feel free to e-mail me at Dr.CurtisConnors@yahoo.com P.S, I am not sure how this process would effect breeding ... havent made it to breeding yet but in short .I kinda think this process would cause any offspring to be sterile..... Tho life always finds a way.... Dosent it ?

Nanobots CAN WE PROVIDE? 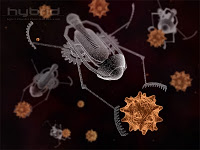 Nanorobotics is the emerging technology field creating machines or robots whose components are at or close to the scale of a nanometer (10−9 meters).[1][2][3] More specifically, nanorobotics refers to the nanotechnology engineering discipline of designing and building nanorobots, with devices ranging in size from 0.1–10 micrometers and constructed of nanoscale or molecular components.[4][5] The names nanobots, nanoids, nanites, nanomachines or nanomites have also been used to describe these devices currently under research and development.[6][7] Nanomachines are largely in the research-and-development phase,[8] but some primitive molecular machines and nanomotors have been tested. An example is a sensor having a switch approximately 1.5 nanometers across, capable of counting specific molecules in a chemical sample. The first useful applications of nanomachines might be in medical technology,[9] which could be used to identify and destroy cancer cells.[10][11] Another potential application is the detection of toxic chemicals, and the measurement of their concentrations, in the environment. Rice University has demonstrated a single-molecule car developed by a chemical process and including buckyballs for wheels. It is actuated by controlling the environmental temperature and by positioning a scanning tunneling microscope tip. Another definition is a robot that allows precision interactions with nanoscale objects, or can manipulate with nanoscale resolution. Such devices are more related to microscopy or scanning probe microscopy, instead of the description of nanorobots as molecular machine. Following the microscopy definition even a large apparatus such as an atomic force microscope can be considered a nanorobotic instrument when configured to perform nanomanipulation. For this perspective, macroscale robots or microrobots that can move with nanoscale precision can also be considered nanorobots.
Powered by