Oscorp is a mutlinational corporation based in New York. It was created and ran by its CEO, Norman Osborn. Norman studied chemistry and electrical engineering in college. He also took a number of courses in business administration.

Oscorp Tower
Oscorp Tower is the colassal skyscraper that stands as headquarters for the industry. It is unique in design and resembles Oscorp's latest technology. Inside holds many fancy rooms and facilities; its work areas, where loyal employees and even interns can concentrate on their research, its robotics lab department, cross-species facilities, homerooms, the BioLab and security areas. The robotics lab department is  owned by Doctor Alistaire Smythe. Now, the lab is off limits until further notice. The cross-species facilities are located in few places within Oscorp. Oscorp's homerooms can be found in most places throughout the tower, and they are used for relaxation, breaks and lessons. It is unsurprising to see many employees walking within these rooms. Next, the BioLab was made for research on multiple things regarding Oscorp scientists' work.

Oscorp Archives
This building is the factory in which some of Oscorp's creations are made, but it holds much more than just that. 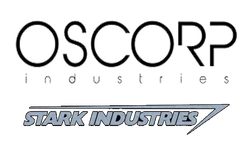 BREAKING NEWS: THE PARTNERSHIP YOU'VE BEEN WAITING FOR.
After 10years of planning, Oscorp sent Stark industries a request to help them with weapon/armour in exchange for general knowledge of how they do things. 2 Hours ago Tony Stark aka the brilliance behind the IRON MAN suit has agreed to share interests. More news soon. 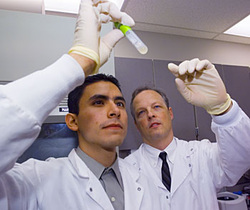 Many Questions have been asked about our work and YES! We can confirm that we are working on "Cross Species Genetics" working very closely with Neurogenetics. Neurogenetics; studies the role of genetics in the development and function of the nervous system. It considers neural characteristics as phenotypes (i.e. manifestations, measurable or not, of the genetic make-up of an individual), and is mainly based on the observation that the nervous systems of individuals, even of those belonging to the same species, may not be identical. As the name implies, it draws aspects from both the studies of neuroscience and genetics, focusing in particular how the genetic code an organism carries affects its expressed traits. Mutations in this genetic sequence can have a wide range of effects on the quality of life of the individual. Neurological diseases, behavior and personality are all aspects of man studied in the context of neurogenetics. The field of neurogenetics emerged in the mid to late 1900s with advances closely following advancements made in available technology. Currently neurogenetics is the center of much research utilizing the cutting edge of research techniques.
Powered by